October 31st saw the arrival of something mysterious, and potentially very scary for humanity… I’m talking, of course, about COP26. (Oh, and it was also Halloween!) Here’s what you need to know about this big global climate meeting.

From October 31 through November 12, the 197 countries who are party to the UN Framework Convention on Climate Change (UNFCCC) will be meeting for the twenty-sixth “conference of the parties” (CoP), in Glasgow this year. Some of these COPs have been milestones in fighting the climate crisis:

That sets the stage for this year’s COP26 conference (if you’re doing the math, COP26 was slated for 2020 but postponed due to the global pandemic). COP26 is an important one, because since it’s five years out from the Paris Accord, nations have to “ratchet” up their national contributions to the climate crisis. If every country does what they pledged to do in Paris, we’d still see a 1.9˚ C to 3.0˚ C temperature rise, which means all countries must ratchet up their climate ambitions to stay under 2.0˚ C.

Hopefully that gives you enough to talk about around the dinner table! If you’d like to learn more, here are some additional places to look:

We’ll find out soon if the policymakers have achieved progress on the climate crisis, which is becoming more acute each year (underscored by the release of the IPCC’s Sixth Assessment Report this summer, which said—cliffs notes version—”It’s bad, real bad yo”). Greta is unconvinced, but I still have hope. The next milestone to look for is the global stocktake of emissions, slated for 2023. Let’s hope we’re all having a more hopeful conversation by then. 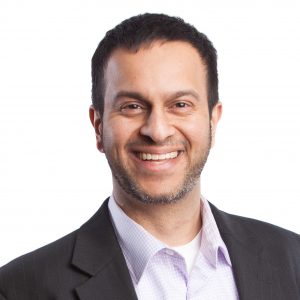 Asheen (he/his) is the CEO of Eleven Radius, an industry group for dynamic fashion companies committed to the circular economy. Prior, Asheen spent over a decade in corporate sustainability, serving as the global head of sustainability for the $4B tech company Dassault Systèmes, where he co-authored the aerospace sector guidance to the Greenhouse Gas (GHG) Protocol Corporate Standard and supported the Sustainable Apparel Coalition’s Higg Product eco-index.

Asheen received his Biologist at the Design Table (BaDT) certification from the Biomimicry Institute in 2007 and has been practicing and teaching biomimicry since. He worked as a Biomimicry Commercialization Consultant in the aerospace industry, and developed and taught the MBA course “Innovation Inspired by Nature”, which received positive press in BusinessWeek and The Economist.

Asheen serves on the boards of Net Impact and the Environmental League of Massachusetts (ELM) Action Fund. He speaks fewer languages than he’d prefer, runs and hikes less than he should, and drinks too much espresso and not enough bourbon.